Big data plays significant role in smart city solutions – likewise processing of data gathered via IoT devices so that additional analysis may be performed to identify trends and requirements in the city. Sensors deployed across the city create massive quantities of data, but if it is used efficiently, it may lead to numerous improvements in the city.

Many governments are considering adopting the smart city solutions implementation in their cities – implementing big data applications that support smart city components to reach the required level of sustainability and improve the living standards.

Smart cities utilize multiple technologies to improve the performance of health, transportation, energy, education, and water services leading to higher levels of comfort of their citizens. It also involves reducing costs and resource consumption in addition to more effectively and actively engaging with their citizens.

As digitization has become an integral part of our everyday life, data collection has resulted in the accumulation of huge amounts of data that can be used for improving lot of things. Effective analysis and utilization of big data is a key factor for success in many business and service domains, including the smart city domain.

Main strength of the big data concept is the high influence it will have on numerous aspects of a smart city and consequently on people’s lives. Many governments have started to utilize big data to support the development and sustainability of smart cities around the world. This has allowed cities to maintain standards, principles, and requirements of the applications of smart city through realizing the main smart city characteristics. These characteristics include sustainability, resilience, governance, enhanced quality of life, and intelligent management of natural resources and city facilities.

There are well-defined components of the smart city, such as mobility, governance, environment, and people as well as its applications and services such as healthcare, transportation, smart education, and energy. To facilitate such applications and services, large computational and storage facilities are needed. One way to provide such platforms is to rely on Cloud Computing and utilize the many advantages of using cloud services to support smart city big data management and applications.

How does the city become smart?

The technological layer of a smart city includes:

Few examples of city activities that can be smart :

What is Big Data?

It can be defined as data sets whose size or type is beyond the ability of traditional relational databases to capture, manage and process the data with low latency. Characteristics of big data include 3 Vs…

These days, sources of data are becoming more complex than those for traditional data because they are being driven by artificial intelligence (AI), mobile devices, social media and the Internet of Things (IoT).

For example, the different types of data originate from sensors, devices, video/audio, networks, log files, transactional applications, web and social media — much of it generated in real time and at a very large scale. 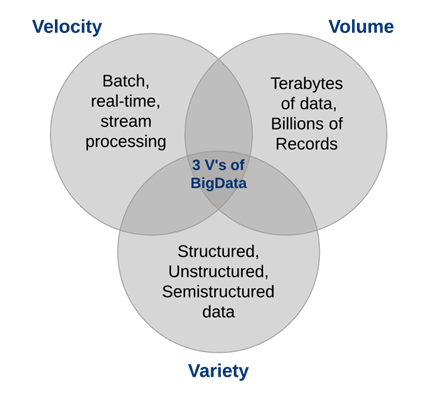 Where Smart Cities Store Their Big Data (and other data)?

Smart cities need a huge amount of archived and real-time data to function properly. Some of the example data types are…

Smart cities can store their data in three main locations:

What is Big Data Analytics?

In general, Big data analytics is the use of advanced analytic techniques against very large, diverse big data sets that include structured, semi-structured and unstructured data, from different sources, and in different sizes from terabytes to zettabytes.

With big data analytics, we can ultimately fuel better and faster decision-making, modelling and predicting of future outcomes and enhanced business intelligence.

When you build your big data solution, consider open source softwares/platforms such as…

Impact of Big Data on Smart-Cities

A smart city uses sensors and connected devices to collect and analyze data. This data is used to…

Big Data Analytics can process data from IoT devices and sensors to recognize patterns and needs. Such analysis can…

Big data systems introduce efficiency into a complex data infrastructure. Big data can have an impact on various sectors of a city, including transport, public safety, city budgets, and more.

Smart cities must provide security for their citizens. Cities can use predictive big data analytics to identify which areas are prone to be hubs of crime and predict the exact crime location. Information like historical and geographical data helps cities to create a much safer environment.

Traffic congestion is a major problem in many cities since it can cost cities millions in revenue. Cities can manage transportation by analyzing data from transport authorities. The analyzed data can uncover patterns that help reduce traffic congestion and help authorities implement data-driven road optimization.

Cities invest a lot of money in transforming a city into a smart city. These investments can be either for remodeling or renovation. Analysis of big data can suggest which areas require transformation and what kind of transformation. As a result, cities can make dedicated investments for required areas.

1. Data professionals collect data from a variety of different sources. Often, it is a mix of semi-structured and unstructured data. While each organization will use different data streams, some common sources include:

2. Data is prepared and processed. After data is collected and stored in a data warehouse or data lake, data professionals must organize, configure and partition the data properly for analytical queries. Thorough data preparation and processing makes for higher performance from analytical queries.

3. Data is cleansed to improve its quality. Data professionals scrub the data using scripting tools or data quality software. They look for any errors or inconsistencies, such as duplications or formatting mistakes, and organize and tidy up the data.

4.The collected, processed and cleaned data is analyzed with analytics software. This includes tools for:

Accessibility of data – With larger amounts of data, storage and processing become more complicated. Big data should be stored and maintained properly to ensure it can be used by less experienced data scientists and analysts.

Data quality maintenance – With high volumes of data coming in from a variety of sources and in different formats, data quality management for big data requires significant time, effort and resources to properly maintain it.

Choosing the right tools – Selecting from the vast array of big data analytics tools and platforms available on the market can be confusing, so organizations must know how to pick the best tool that aligns with users’ needs and infrastructure.

With a potential lack of internal analytics skills and the high cost of hiring experienced data scientists and engineers, some organizations are finding it hard to fill the gaps. 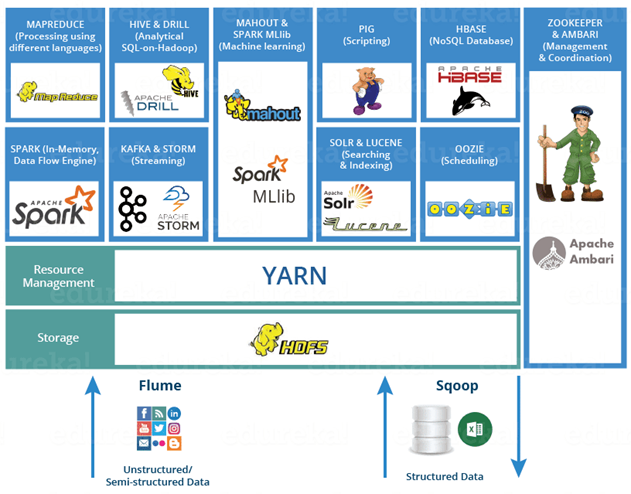 Few of the key tools / technologies are briefed below :

HDFS – The Hadoop Distributed File System ( HDFS ) is a distributed file system designed to run on commodity hardware. In HDFS data is distributed over several machines and replicated to ensure their durability to failure and high availability to parallel application.

SCALA – Scala is used in Data processing, distributed computing, and web development. It powers the data engineering infrastructure of many companies. When it comes to performance, Scala is almost ten times faster than Python. Scala’s reliance on the Java Virtual Machine (JVM) during runtime imparts speed to it. Generally, compiled languages perform faster than interpreted languages. Since Python is dynamically typed, the development speed reduces.

FLUME – Flume is an open-source distributed data collection service used for transferring the data from source to destination. It is a reliable, and highly available service for collecting, aggregating, and transferring huge amounts of logs into HDFS.

YARN (Yet Another Resource Negotiator) – YARN is a generic job scheduling framework. It is also responsible for managing the resources amongst applications in the cluster.

Apache Ambari is an open-source administration tool deployed on top of Hadoop clusters, and it is responsible for keeping track of the running applications.

MapReduce facilitates concurrent processing by splitting petabytes of data into smaller chunks, and processing them in parallel on Hadoop commodity servers.

In fact, there are plenty of tools / technology stacks are available for Big Data Analytics, where below diagram highlights some of them only : 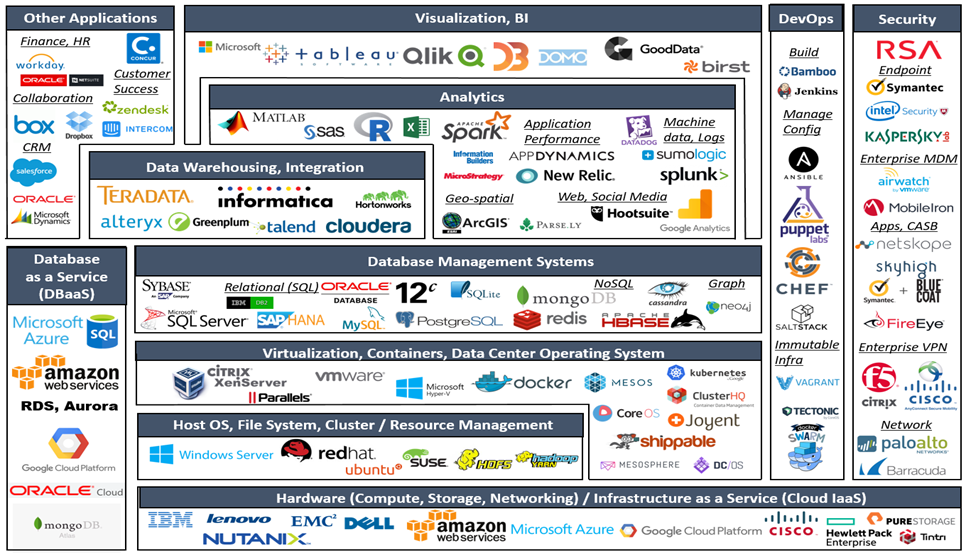 Factors to consider while selecting a Big Data tools / technologies

You should consider the following factors before selecting a big data tool : 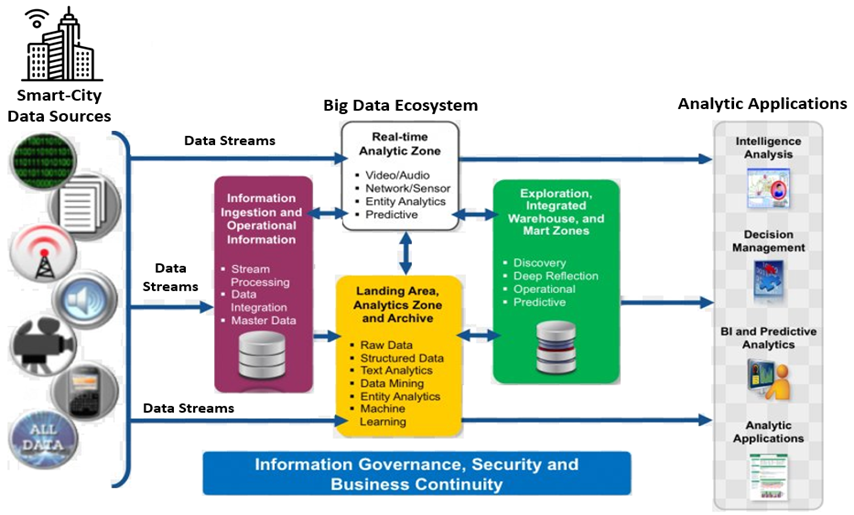 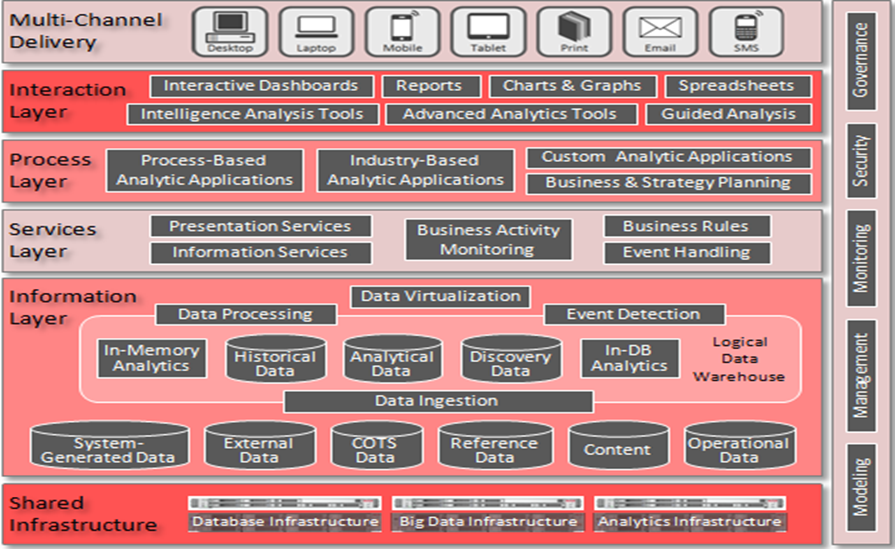 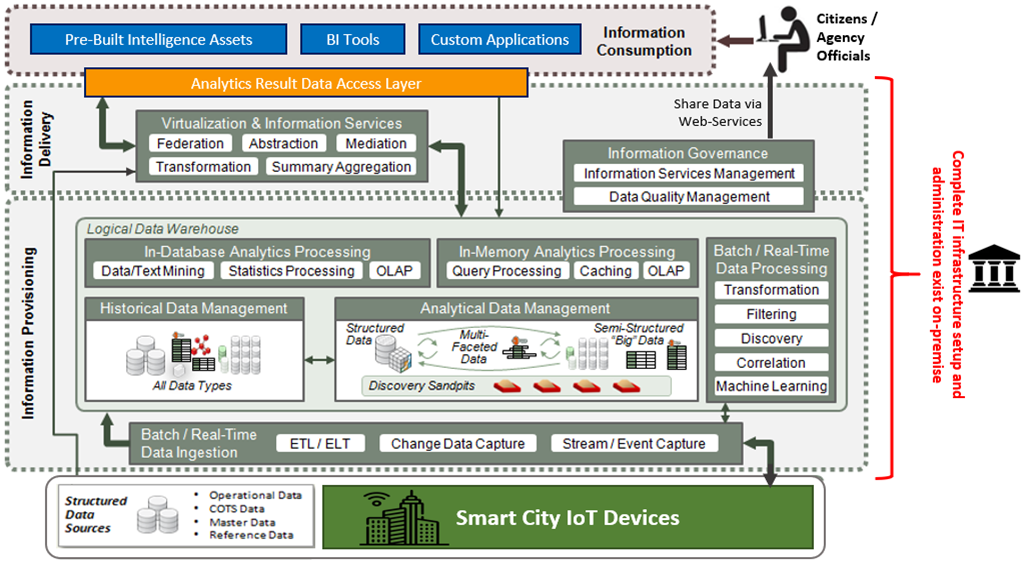