Do you want to succeed in DevOps career path?

If you are humble to enter DevOps path in your career or you are already there but want to become an expert, then below I am listing few important programming and scripting languages which you must think of learning to succeed in DevOps career path. 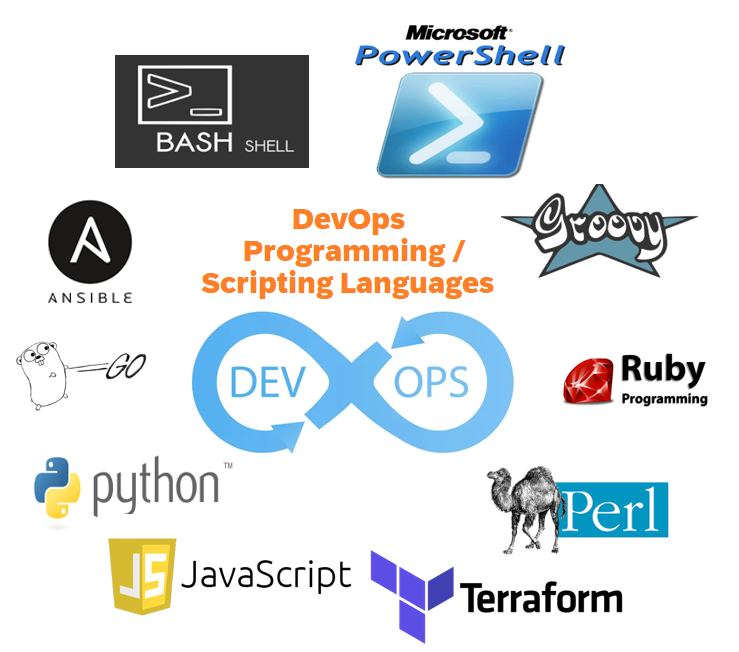 1. GoLang
It must be quite surprising for you to know that DevOps tools like Docker (for containerization of apps), Juju (for orchestration), Terraform (Infrastructure as Code), and Kubernetes (Container orchestration) are written using Golang. And this is simply because it is easy to compile standalone, static binaries for all major operating systems. No libraries, no dependencies, nothing.

Golang was developed for speed, the language emphasizes on lean, network-efficient runtimes, means great things for DevOps. It is the new kid on the block, emerging from Google’s own open-source kitchen and it’s been taking the DevOps world by storm since its inception in 2009. Its syntax draws inspiration from other popular languages such as Python and C++, making it relatively easier for new programmers to pick up on.

As there is wide adoption of GitOps practice with Kubernetes operators, GoLang is a sought-after skill for Kubernetes Operator development.

2. Bash
Bash scripts (Linux Shell Scripting) automate DevOps processes such as installation and configuration management. DevOps developers use Bash to write deployment scripts that handle the hard lifting in new app releases. Many companies use bash scripts for their automated tasks even though there are many other open-source tools available for configuration and deployment. Bash scripts are extensively used in building Docker base images and CI/CD pipelines.

Remember that, if you are a DevOps engineer working on Linux environment, then Bash should be your DevOps scripting language.

3. Python
Python has become the most popular DevOps programming language. It is simple to learn and includes an extensive library of modules for executing various DevOps activities. Python is an excellent language for automation because of its readability, comprehensibility, and concise syntax. It’s also an interpreted language, which means it runs far faster than compiled languages such as Java.

Python is a great language for automation because of its readability, comprehensibility, and concise syntax. It’s also an interpreted language, which makes it relatively fast to execute compared to compiled languages like Java. Its scripts can be run directly on the server, thereby making deployment easy.

Most importantly, Python has libraries for managing infrastructure (such as Puppet or Chef), automating testing (Selenium, WebDriver), and building web applications (Django, Flask).

4. Groovy
Groovy is based on Java, making it easy to learn for developers having some programming experience on Java. It’s typically used for automating software development tasks such as building files, compiling code and running tests. But when it comes to DevOps, groovy is heavily used in Jenkins. With good knowledge of Groovy scripting, you can easily write Jenkins pipeline as code and Jenkins shared libraries.

On other side, Groovy is a dynamic object-oriented programming language for the Java virtual machine (JVM) that can be used anywhere Java is used. The language can be used to combine Java modules, extend existing Java applications and write new applications.

5. Powershell
If you are a DevOps engineer working on windows environment, then Powershell should be your DevOps scripting language. It offers a robust scripting environment for automating common tasks, as well as powerful data manipulation and analysis features. Additionally, Powershell scripts can be run directly on the server, making deployment easy.

Powershell is a task automation, scripting, and configuration management framework from Microsoft, built on top of the .NET Framework. It provides a command-line shell and scripting environment for managing Windows systems. It can be used for automating common tasks such as system administration, app deployment, and infrastructure management. It also offers powerful features for data manipulation and analysis.

6. JavaScript
JavaScript is a safe bet for developers. However, JavaScript is a bit more complicated when it comes to DevOps but it doesn’t mean that they don’t work together. IaaC tools like Pulumi support Javascript and Typescript for building infrastructure as code.

NodeJS is a server-side implementation of Javascript, which allows node developers to create APIs for backend applications, as well as command-line scripts. NodeJS has many modules available for performing various DevOps activities such as streamlining the processes involved in app deployments. It also provides libraries for working with continuous integration tools like Jenkins CI or TravisCI.

It is a safe bet to developers to say that the world of the internet runs on JavaScript as well as HTML. Many of the most popular frameworks and libraries are written in JavaScript, from Angular to React and Node. There is a massive community of JavaScript developers; which means that there’s always help available on GitHub or Stack Overflow.

Please note that, above list doesn’t end here. As the technology is moving very fast, you will come across many other programming and scripting languages that work well with DevOps. Therefore choose DevOps tools wisely while implementing it  in your organization or project.

1 thought on “Are you humble to become DevOps engineer or DevOps expert? Then you must learn these programming / scripting languages…”